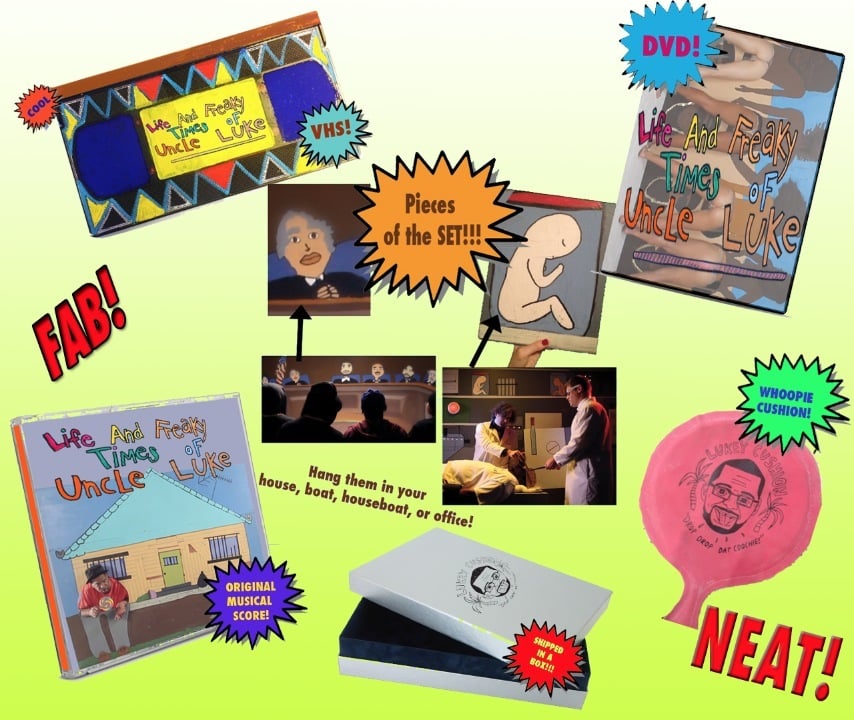 Life and Freaky Times of Uncle Luke is part of the permanent collection at the Miami Art Museum. It premiered at Sundance in 2012 to rave reviews and went on to play at several dozen other festivals like SXSW, Milan, Los Angeles, and AFI.

Now you too can own what is undoubtedly the best remake of a French art film from the 60's starring a booty bass musician with this limited edition deluxe box set, of which only 69 have been made.

Included in this set are:

- Hand-decorated VHS copy of "Life and Freaky Times of Uncle Luke" Film, complete with deleted epilogue.
- Original set pieces. These are actual pieces of the wooden boards used as sets, hand numbered.
- Original Lukie cushion (a whoopie cushion with Luke's face on it), named one of the most sought after souvenirs at Sundance by IndieWire.
- DVD copy of the film.
- Original soundtrack featuring the opera version of "Pop That Coochie" by John Hancock and other treats.

All delivered in a custom box featuring your favorite Uncle's smiling face.

Remember, only 69 of these exist- once the set pieces are gone we are never making them again.

A portion of the profits will be donated to Luther Campbell Charitable Foundation and the Liberty City Optimist, which provide a multi-facet after school program consisting of academics, sports, and civic activities for Miami Youth.

(If you want a specific part of the set please specify in the message. We will do our best to accommodate you, but most set pieces will be chosen at random. All of them are cool, though.)